But thank god we don't have socialized medicine. You might have to wait for treatment, everyone reminds me.
Posted by Lesley at 6:51 PM No comments:

The Bypass Effect On Diabetes, Cancer

Like everyone else, I've sort of had a subconscious sort of prejudice about all of the options out there for losing weight. "Get off the couch and stop eating at McDonalds" my mean subconscious says when I see a weight loss commercial. But I'm starting to understand more and more what a quagmire metabolism and other things are as I'm getting older.

I watched a much loved aunt die of diabetes and it was awful. This knowledge would have saved her life. I remember in her last days, when she finally got out of long term care and back home, she was eating horribly, and I said "If she were drinking herself to death, we could call someone in to intervene and put her in rehab." No one carts someone away for eating hostess cupcakes. She was at home from the 4th of July until Labor Day, when she died. She was in her mid 50s.

She would have been saved by this surgery. However, as the article points out, the surgery is only approved for the morbidly obese and I do not think she would qualify. However, the process of the bypass itself, not the weight loss, is what seems to cause the remission in diabetes, so it would probably have similar benefits in those without obesity. My college roommate is now a type II diabetic and I worry about her.

Other medical news:
Work Disability Statistics Improve for Arthritis Patients
The often-cited stat "50% of people with RA will be too disabled to work in 10 years" appears to be no longer true.

Hooray for small victories. I think it might be because people are getting diagnosed sooner, but hey, I'll take it.
Posted by Lesley at 6:27 PM No comments:

Mesh... it's about the mesh

So today, I got my XO laptop from One Laptop Per Child. I have been blogging for months about the coolness of the XO I got as a loaner. But for the next two or three days, I have two XOs! And I'm realizing how incredible these things are.

It's all about the mesh. XO laptops talk to each other. In real time. Not over the internet but through their own internal "mesh." I take a picture on one, it shows up the other. Not instantly, but close. I type on a word processing document, it shows up on the screen of the laptop 10 feet away.

The coolness of this is beyond words. The applications for a classroom of kids with XOs is staggering -- teacher puts two or three activities on the mesh, students log on, join the activity, and add their thoughts. Teacher browses to a website, puts it on the mesh, a kid joins in.

Right now, the worst thing about the technology I deal with is the grown up factor -- someone has to program the communication device and update the vocabulary. If the lessons are going to grow and change, I have to get there before the kids and set up the technology. A kid can't own the technology when the adult always has possession of it. I was trying to get a boy to print out what he wrote on his alphasmart the other day, but he was too possessive of it to let me plug it into the computer.

There are ways around that -- Prentke Romich makes a program that allows a computer to emulate their AAC devices and I can program that and transfer it over. I do that with Jessie's. R.J. Cooper's mini-auggie had a PC and pocket pc version of the software. Still... transfers are never smooth. Never. And the adult yanks away your machine and when you get it back, the files are different. And there are some that don't work after a transfer, something that breaks. It's how it always goes. Child ownership is a nice dream, but it's not possible in most of the technology I work with because the adult has to maintain it.

With the mesh, I could make S's spelling words as a memorize game on my XO, he could log in, get the activity, play a game with me, then keep that activity on his XO. He could change the words for his spelling words next week and I could check to make sure it's working by playing a game with him.

It sounds like a simple download, or the games of scrabble I play using facebook where my sister in Korea and I face off and grumble at each other from 13 timezones away. But it's different. It's made to be immediate. It's made to be something that I show a kid, sitting right beside him. "Okay, do you see that orange piece of notebook paper? That's your worksheet. Click on it." Not "Hold on... don't touch... see it's downloading. Wait. I have to put this file on it."

With more advanced students, there are the bulletin boards and the WebCT and Blackboards and things like that. Not real time, but close. Teacher can put an assignment up and everyone can download it. People can talk back and forth. But it's built on a college sort of model -- you think about it, you add to the conversation, someone else comments. That someone else can be in the next room or next time zone. That is really awesome experience. But it's really top down in collaboration.

But most the kids I know don't really get that experience. The internet is where the sponge bob games are. Maybe it's for sending email to people you love in real life, but it's not really until a kid is a teen that the internet becomes a tool for connecting. The mesh bridges that gap. A classroom is a dynamic connected place and I haven't found anything that can mimic or facilitate that connectedness except the XO mesh.

Some classrooms in our district have computers at every desk. I think of first graders coming into a room, switching on their computers, and working at their math problems, and I shudder. Where's the interaction in that? Where is the exploration? The program is dictating the next problem and they follow along. Perhaps we ought to set up Dilbert-style cubicles for them now.

Compare that to the XO, where the game of memorize your buddy is challenging you to is made up words he just put on there.

I'm downloading programs and testing mesh capabilities. Most of the original programs that come with the XO rock. However, I wish all of the programs could collaborate like the word processor. I was hoping that the words I typed in the speak (speech synthesis program) would be spoken by another computer, but no luck. Ditto for the music players -- I could easily jump into the current state of a jam session and use it as a starting point, but I could not make any changes that went back over the mesh to the original activity.

Anyway, I'm going to keep playing.
I'm having WAY TOO MUCH FUN not to.
Posted by Lesley at 5:02 PM No comments: 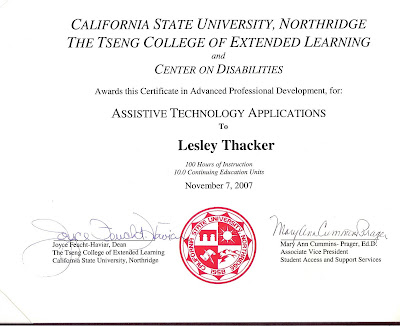 The AT bandita strikes again....

What happens is that I'm often left with kids to occupy them. Or I'm often thrown into a class to entertain and break up dogfights while having little power to try to help change things to prevent the dogfights. Thank god for my little XO and the Gateway. Today I used the Speak application on the XO to play Simon Says when a crisis happened -- the internet was down and there was no computer lab for the day!! These kids live for their computer lab and flash games from NickJr, but we were able to survive as they typed commands to each other. It was awesome!

I've also requested and been allowed to pull a few kids here and there to ease the congestion in the special ed room. Because of that, I've been actually able to field test some of the AT I love. Again, not in any official capacity, but as a sneaky AT bandita. Here are my favorites so far:

Contents of my AT desktop folder:

I field tested several screen readers for the ATACP coursework, but this one was the best. The voices are the best of any of the free readers I've played with. You do have to cut and paste and that's a problem for a lot of users. A good interface too. The Trial Version never expires, but the fee version has more features. I have not tried the fee version yet, but I might one day.

EdWord
I finally got this one to work in a way that's really helpful. At the very basic level, it's a talking word processor that echoes keystrokes and/or words. I've had kids use it at this level and love it -- these are kids that can use a regular word processor, but often don't. The audio feedback seems to be such a plus. It also has a grid function where you can customize text and pictures. A user can click on the grid and the words will appear in the text document. I just now figured out how to make the grid editor work.

There are some really neat products from the DeafBlind Online site. I discovered them through OATS, the Open Source Assistive Technology Site. It's an awesome resource. I'm going to try to remember to put the link on my sidebar.
http://www.oatsoft.org/

The rest of the products are from www.RJCooper.com. He makes the best assistive technology/educational software out there, hands down. He does little things, like keep the program locked so that a curious and/or distractable kiddo can't stray out of a program unless he or she knows the hotkeys.

Spell-A-Word
Weekly spelling lists made fun. The program spells the word and then asks the child to do the same. I've seen kids jump with surprise - "Is the computer talking to me?" It's multi-modal -- words are seen and heard. I've seen some of my kids ace spelling tests when I give them the words, but still not be able to read the words back to me.

Same concept, but in math. Program goes through a problem, then the child types the problem.

Q&A
A bit harder. Program reads a passage, then asks a question based on the passage. Child must type answer. I'm waiting to use this one on my fifth grade vocabulary group. I think this has some awesome potential. It's in Beta right now.

Point-To-Pictures Studio
This is designed as a augmentative communication training program, but it's so much more than that. I use it to introduce vocabulary words. You could also use it to match vocab words to pictures and/or spoken text.

I've wished for a computer workstation for the special education/resource students where during spelling, for instance, when there are three or four different groups with three or four spelling lists, one or two kids could be doing their spelling via computer. It appears that my laptop is becoming that workstation by default. The kids love it. I just wish the adults in charge had time to see and understand it.