Hahahah. Posting from google docs! Go ahead and block blogger, school filters. I shall get around you anyway. Mwahahahah. There's a lot to tell on the special ed front, including having an offer for a classroom for a few weeks but ultimately having to turn it down. For those two weeks, in my head, I was an AWESOME special ed teacher. It also let me know how BADLY I want/need my own classroom.

As the year winds up, I want to post more of the adaptive materials that I've made. I'm leaving tons of materials with Jessie or at the school, so I want to remember how what I've done so I don't reinvent the wheel.

Right now, I'm gluing backgrounds to frame puzzles. The jump between wooden cut out puzzles and jigsaw puzzles is a difficult jump for many of our kids. There are some 25 piece frame puzzles I've seen in stores, but they often have a blank background and sometimes don't have true interlocking pieces. My favorite "step up" puzzles are the Progressive Puzzles by Discovery Toys, which, sadly, Discovery Toys doesn't sell any more. It's a set of 9 puzzles with true interlocking jigsaw pieces. Three puzzles are four pieces, three have 6 pieces, and three have 9 pieces. The designs are bright and while childish, are not babyish, which I feel is important. However, the background is blank and getting started with the right piece is sometimes difficult. So I am scaffolding a bit.

First, I put the puzzles together, laid them face down on the copier, then ran a black and white copy of each puzzle. (If you have access to color, don't use it. The black and white is more of a visual contrast and lets the learner know which pieces are done.) 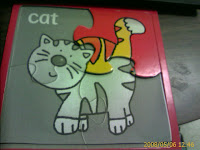 Next, I cut out the background and rubber cement or glue it to the puzzle frame. Final results: a more intermediate puzzle for beginning learners. Note -- the paper on the inside of the puzzle won't last very long. But hey, by the time it's ripped off, hopefully your learner won't need it anymore. Still, you can always paste another. It works for 12 piece puzzles that I picked up the line at Walmart. 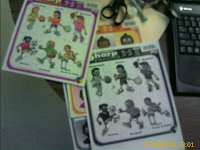 (I apologize for photo quality -- I took these with my camera phone while at school.)

I tried doing this with a 70 piece jigsaw puzzle with no frame. I modge-podged the outer edges down on cardboard to make a frame, but that rendered it inflexible and I was unable to put the pieces in once the glue dried and shrank. I will keep trying to figure it out though. Maybe glueing the pieces themselves to the background would work instead putting of modge podge over the whole surface.
Posted by Lesley at 1:15 PM No comments: