A few more of my favorite things...

Kitchen stuff for people with bad hands -- now with ratings 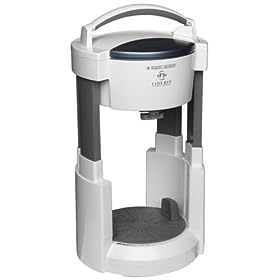 Rating - 8 /10
I bought one for my grandma a few years ago and then got a hold of this one at a garage sale. I've given it to my father-in-law (well, it's in the trunk to give to him) and I miss it.

Unfortunately, it takes up a lot of counter space. And it does not fit the one thing I consistently can't open -- the tank on my cats' automatic waterer. Still, handy. I haven't convinced hubby it's worth the counter space but he's never been in the house himself without being able to open anything. 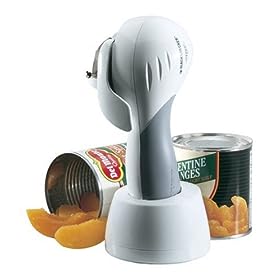 Rechargable Can Opener
6 out of 10
I can't work a manual can opener without a measure of pain involved. Come to think of it, crying over a can of green beans while the boy I was supposed to be watching tore through the house was a main frustration of my job a few years ago. It was her house so I used her tools. I should have brought this over with me.

Unlike those under-counter models I grew up with, this one doesn't make me have to lift or support anything. My friend M. who has use of one hand, uses this too.

I struggle to get it to clamp down right on the lid though. When it works, it's great, but when I can't get it to attach right, it's frustrating.

My mother and stepfather-in-law just bought me the one touch can opener.
We'll see what happens. Apparently there's a One Touch Jar Opener too, but it's flimsy compared to my (I mean now my father-in-law's) Black and Decker.

I don't have a lot of cool kitchen stuff, and since my hands have been hurting lately, now might be the time to investigate options. What do you get someone who hates to cook and has achy hands? I can tell you what doesn't work for me:

1) those lovely pampered chef stoneware things.
Too heavy. I can't lift them.

We have a set of really nice Cephelon pots and pans that hubby and I bought after the wedding with our Bed Bath and Beyond certificates. Same principal. Too heavy -- not necessarily too heavy to cook with, unless I'm doing something that needs to be lifted -- but too heavy to wash Not a good idea. I've often thought about secretly buying a saucepan and frying pan at Walmart.

2) the pampered chef chopper
wanted it to work really badly but the force required to hit the thing was not good.

These are a few of my favorite things....

I've tried to keep the focus of this list disability-related:

For the first installment, I bring you a discussion of shoes. Considering the tears shed at my little sister's wedding over my footwear limitations, (her tears from aggravation, mine because I FREAKING HURT!) shoes are sensitive right now, literally and figuratively. I went through a phase where I could only wear my Tevas -- that's no joke in November. Here are a few options for those of you shopping for limping family members.

I currently own three pair of shoes that I can stand to spend a day in -- 1 pair of Asics tennis shoes, one pair of Easy Spirits that pass as black dress shoes, and one pair of brown speedo aqua shoes that I wear with kakis and try to pass as brown dress shoes. (I know how tacky it is, but pain is also tacky!) All are pretty worn out and gnarly, btw. Here are the best shoes I've found for my arthritic feet. I'm sure there are better shoes out there, but I'm also broke.

My tennis shoes years ended a long time ago, I thought, in college when my toes began to drift inwards. Silly me. It was just my BAD tennis shoes years that have ended. I hobbled around college in cheap men's tennis shoes after wearing out my second pair of Docs. In AmeriCorps, I discovered Rykas. They accommodated my ever-drifting toes and flattening arches because they are made for women -- not just trimmed down men's running shoes. Women tend to have much smaller heels, so Rykas have smaller heels and wider toe boxes. I wore out several pair in my AmeriCorps/running/marathon phase.

I'm torn between being nostalgic and wondering what kind of crazy girl I was to run a marathon. No wonder I'm trying to save my feet! I foolishly did not have orthodics then, so I can't attest to how they do with orthodics at all. (Ran a marathon, no orthodics. Dear god, what was wrong with me?) 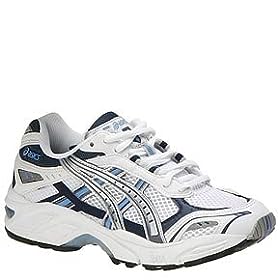 Asics Duomax: Ooohhh.... I just did a search to see if I could steal a photo and guess what?! They still sell these!! yayayaya. Amazon has them for $50. I paid $120 for mine 2 years ago at my little sister's chiropractor's. He does all sorts of gait analysis for runners and stuff and I'd been hobbling around on my orthodics for a few years and thought he could give me some advice. Mine look like heck and I'm afraid it's to the point where I can't even wear them anywhere but to mow the yard. But they hold my feet in nicely and keep me from turning my ankles. I've added some dorky cord locks and smaller laces. These shoes have served me nicely, aside from a phase where that alien bump on the top of my foot was swollen and supersensitive (and yes, there is a medical term for alien bump but I forgot it. )


Here are my Easy Spirit shoes that pass as my dress shoes. Mine have a little bit of red trim and are the "Pathmaker" style instead of whatever these are, but really, same thing. They won't win me any fashion awards and it sometimes hurts to have to fight the old ladies for the shoes, but they are black, stretchy, and accommodate orthodics. Because I have worn mine to work about 4 out of every 5 days this year, mine are starting to look shabby. They aren't built to last, but I guess lasting a year of heavy use is good enough for $50 shoes.

My Sam's Club $20 brown speedos have absolutely NO serial numbers on them so I can't tell what kind they are. They have been wonderful though -- brown nylon, breathable, with fake laces and they look like a all-terrain type shoe. When I first got them, the elastic was too strong and I struggled to slip them over my heel. If you go to Sam's Club this season and see these, I'll take a 9 in brown and black. Thanks.

Those of you who knew me when might wonder about the Doc Martins I used to love and live in. They were great for when I was first sick -- light but with a little support. More importantly, I thought they were Cool As All Get Out (tm). (I mean, come on! Whip in the Livecrime video had the exact same pair! And yes, that was yet another Queensryche reference.) I wore out two pair in college and had another in Ireland. That's where the alien bump appeared, a perfect friction mark between my feet and where the laces are tightened most on the boot. Oops. I was shown how my very unsteady gate makes Docs a Bad Thing (tm) for me because of how quickly I can wear down the underside, making them very uneven. So except for special occasions (you know, like my wedding, where I wore white Docs) Docs are a thing of my past, like my motorcycle jacket and embarrassing love for hair metal (oh...wait.... but Queensryche transcends hair metal).

Other shoes that work for me:

Tevas! I've had two pair of Teva Pretty Rugged and I have a permanent Teva tan --something I was very proud of in my days on the beach in San Diego. They are the only shoes I can wear when the alien bump swells and because they are velcro, I can adjust them to whatever size my feet happen to be. However, unless they are in really good condition, it's hard to dress them up at all, even in Fayetteville where I tried for hippie teacher and tried to wear them under long dresses. Also, the rubber is pretty susceptible to my bizarre wear patterns and without orthodics, they can be inward slanting quickly. I've had the velcro give out on me when walking down hills -- helllllo face plant. Still, these are shoes worth investigating if you happen to live with an alien bump on your foot.

Beware. Tevas will stink and there is NOTHING you can do about it.

I've worn crocs on and off with varying success. My main objection is they look dumb. I wear them alot and I know they look dumb. And I realize this is someone who wore knee-high suede elf boots for years in high school and was married in Doc Martins. But I still think they look dumb. Still, they are tolerable when alien bump doesn't scream at me. With socks on (and I know that's double dumb) I can wear them on days I can't wear other shoes.

I'm currently investigating Drew Shoes. They are made to accommodate orthodics and all shoes are made on similar lasts, so you can order by last once you find a shoe that fits.... which for me, is, of course, the problem.

I'm not a fashion queen, by any stretch of the word, but I'm starting to realize how much my scuffed up sad excuse for footwear undercuts any professional image I'm trying to create.

Still, I think of M. and how she only has one pair of shoes that will fit over her AFOs. Like me, her shoes wear out and get dirty pretty quickly. (I think scuffed up shoes is less a lack of attention, like my sister claims, and more of a symptom of mild mobility impairment -- we're always scuffling and tripping and scraping in ways that most people don't. )So she's stuck wearing dirty tennis shoes to church and to her job. If I end up liking my Drew's, I should send a catalog her way.


I've tried Merrils -- I have a pair of hiking boots from when I could hike, but mostly they are too narrow. I've tried Birkenstocks and all of those brands at the various outdoor stores that are supposed to be flexible and breathable and all that. But with the exceptions of the ones listed here, I just flat out can't find shoes that I can stand for more than an hour or two.

This is not the biggest problem in the world. This isn't even my biggest problem today. But for some reason, I felt compelled to share my shoe frustrations in hopes that there is someone out there that has an answer.

Besides the travelscoot, which would be my answer to a lot of this.
Posted by Lesley at 7:42 PM No comments: