I wasn't expecting THIS while I was expecting!!!

This is what I saw on the ultrasound screen June 10th.

Those two little blobs. The OB/GYN immediately shows her student observer. "Isn't it funny, those two in there?" she was saying and I was looking at the screen."So is that the head and that's the body?" I asked, not getting it. "No, it is two. It is twins," she says.

I was already flat on my back or I would have fallen over.

When the appointment was over, I sat in the truck in the parking lot. My phone was not working well so I had to use headphones to call people, and it still sounded garbled. I called Dave, who was out of town, showing the house we're selling to a realtor. I think I heard him fall against the wall. I left a message for my mom.

I blame TLC, all those Make Room for Multiples shows I was watching during the week I found out I was pregnant and withdrawing from provigil by dozing on the couch all day.

That was at 5 weeks because both babies have a yolk sac? Now I'm 8 weeks tomorrow and fearing Vanishing Twin Syndrome, where one twin disappears in the first trimester for no reason. I'm also realizing I will never find moms like me (oh it felt strange to type that!) on the 'net for support -- rheumatoid, twins, over 35 when they are born. (They'd better not come before then!!!) I'm a triple high risk and couldn't be happier!

I also realize that my dreams of accessible parenting may have to give way to whatever crap we can afford from garage sales. Seriously, the Babee Tenda crib from the last post is almost $1000. Times that by two now and it looks like I'm just going to have hurt my back bending into a traditional crib or get one adapted. Those Tripp Trapp chairs that would allow baby to eat with us at the table and not have me leaning over a plastic tray --that idea is now replaced by a standard Graco garage sale high chair. (For $15 bucks mind you! SCORE!) And I think I can safely forget cloth diapers with nice adjustable velcro closures -- my little pooping machines will probably do more than I can keep up with.

Still, I'm happy. I keep hoping those little guys will stay put for at least 28 more weeks -- twins are considered full term at 36. I'd prefer them to hang in there until week 40 though.
Posted by Lesley at 7:50 PM No comments:

Why do certain diseases go into remission during pregnancy?

ScienceDaily (2010-06-18) -- During pregnancy, many women experience remission of autoimmune diseases like multiple sclerosis and uveitis. Now, scientists have identified a biological mechanism responsible for changes in the immune system that helps to explain the phenomenon.
http://www.sciencedaily.com/releases/2010/06/100617102406.htm

As for me, I'm off all rheumatoid meds for the first time since 1992. Only taking a prenatal vitamin and my sertaline, which I'm tapering off. I feel so amazingly good to be off meds. Those of you who only take meds when you have the cold or flu have no idea!

Posted by Lesley at 7:45 PM No comments:

So, I'm starting to think about what will happen in 8 months.
Ow. Ow. Ow. Ow.
Not good.
But also, the next 18 years. Or specifically, the few months and years after that. And my gimpy arms and wrists and how I'm going to lift and manipulate a screaming, squirming baby in and out of cribs, carseats, strollers, etc. On morning where I can't barely dress myself, I'll have to dress a small person with small snaps and fasteners on the clothes.
It's funny, I know a fair amount about resources for parents of children with disabilities. I have zero ideas on what to do as a parent-to-be with a disability. I remember reading "Time out of Joint" about the author's diagnosis of rheumatoid while raising two children. I don't remember any specifics about how she did it, though. I remember vaguely reading about the use of child carriers in an old edition of "Arthritis Today."
Time to google.
I've always thought that something like a drop-side crib would be helpful. Too bad they're unsafe and about to be banned by Congress. I think I would struggle with a whole drop side anyway.
So, I've been looking elsewhere.
This crib, from Babee Tenda, looks awesome. Too bad it's $1000. I saw it on "Little Parents, Big Charlie." Yes, school is out and yes I watch too much Discovery Channel. Why do you ask? 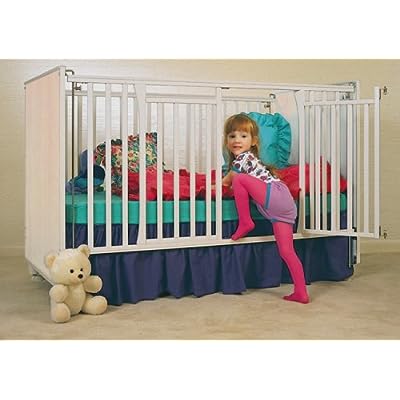 Also an option for about half the price, is the Quick Change Crib from Innovative Crib Designs. The trap door is meant for mattress removal, but I'll be it works great for baby removal and placement too. 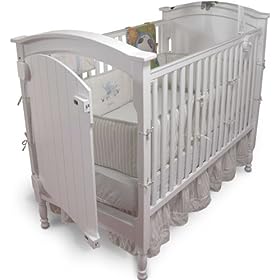 I'm finding a few parenting with disability sites, but most deal with wheelchair parenting.
http://momsonwheels.typepad.com/
A blog by a mom in a wheelchair
http://www.lookingglass.org/
Through the Looking Glass -- an organization serving people with disabilities
Posted by Lesley at 3:24 PM No comments:

So, my back hurts. I thought that was weird because it's not as if I'm carrying any extra weight around. Then today, I started having really bad menstrual-like cramps.

I know that I shouldn't be blabbing about being pregnant until week 12 because of the risk of miscarriage. Chemical pregnancies, where the egg is fertilized but does not implant, are really common -- I saw an estimate of 50% or so. In a chemical pregnancy, a pregnancy test (or two, in my case) will be positive because the body does have the pregnancy hormone. It just is negative a week or so later and the cycle goes on as normal. So I've been waiting all day, thinking that this week of pregnancy will probably be it for me. Playing at being momma was fun, but my period will start any second. I was crampy and sad.

Thank goodness for google. I'm finding that backache and menstrual-like cramping are common signs of early pregnancy! Suddenly, I was excited again! My first real physical symptoms! YAY! Until now, my symptoms have been vague and more consistent with being narcoleptic and off of my medicine than being pregnant. Aside from two positive pregnancy tests and sudden obsession with every twinge in my body, I'm not any different from how I was two months ago. But the backache -- there's a sign I can point to and say "oh yes, I'm pregnant."

Convinced hubby to walk around the block with me and now I'm going to have some ice cream and go to bed. Life = good.
Posted by Lesley at 9:28 PM No comments:

What to expect while I'm expecting

sleep.
a lot of it.
So, I've known about junior for a week now. I'll be an estimated 4 weeks along tomorrow. I have taken 1/2 of a provigil in that time, for my drive back from visiting my mom.

I'm tired.
Dead tired.
Like back to the sleep addict days before my provigil, when I could sleep for 14 hours, wake up, then take a nap. My husband isn't home and I'm out of school, so I just sleep.

I've called the OTIS people and they haven't called me back. In the beginning, my doctors and I agreed that I would continue to take provigil while pregnant, even with the slight increased risk. But since I'm not at work and not driving anywhere, it seems downright selfish to risk it. When hubby comes home and I have a reason to at least be ashamed of being asleep more often than awake, I might reconsider.

I still let myself have 1 glass of caffeine a day. That's probably about the same risk as the provigil. That 1 glass though is in the form of Dr. Pepper, which has 40-75 ml of caffeine depending on the size. 200 ml is the "unsafe" threshold.

I've stopped taken my Enbrel. I had originally thought about continuing it throughout pregnancy, but my rheumatologist and I decided I would stop after conception and see how it went from there.

I'm still on my sertaline and plaquenil. The plaquenil still wakes me up every night two hours after I take it with terrible stomach cramps. Lovely.

Oh yeah, and my mom and I are taking grandma back to England in July. I'm not sure I can do this. That will be a month from now, where nausea will kick in in full force if it's going to kick in, and taking care of grandma is always a struggle anyway. She will fuss over me and it will drive me nuts. But I want to see the England fam again and my sister is going to be there.

Okay, enough whining. I'm still amazingly happy over this whole turn of events. Married, buying a house, having a kid -- who would have thought that I would end up being the traditional one of my family?

Provigil Pregnancy Registry
Posted by Lesley at 6:58 PM No comments: