On having an Olivia

My name is Lesley. With a 'y'. That immediately identifies me as a female from the midwest/South in her 30s or so. You can thank the character "Leslie" on General Hospital in the 70s for having the name cross over to female about that time.

I always liked/hated the status of my name on the fringe of popularity. My sisters might find personalized toys at the stores, but I never did.

My mother is Barbara. You can guess which decade she's from without knowing she's my mom. Smack dab in the middle of the Baby Boom. There were several Barbara's in her class.

My kids were going to have unique names. Different. Not trendy. They might not be able to find a toys with their names on it, but that would be made up for by the awesomeness of whatever names I decided to give them.

Explain to me why I have an Olivia. And how every one else in the world has an Olivia? (In fact, "Olivia" was the 4th most popular girl's name in 2010.)And it why doesn't occur to me to mind one little bit? 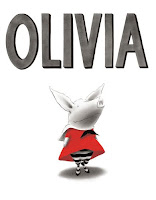 It might have something to do with the pig. Ian Falconer's original "Olivia" book came out around 2000. I was working with J, who is non-verbal and liked to call classmates "pig" in sign language, giggle, and run off. J has Angelman Syndrome, a wonderful smile, and an inner life that I can only guess at. Olivia in the original book talked very little, mostly to negotiate with her mother over not wanting to sleep. She dreamed of singing opera and being in her favorite Degas painting. She wore people out. She reminded me so much of J with her mysterious inner life, her unwillingness to sleep, and her love for everyone and everything. Olivia remained one of my favorite characters in kiddie literature, but I refused to look at any subsequent books, especially those spun off of the television show.

My cousin had a baby girl and almost named her Olivia. When she changed the name the week before the baby was due, "Olivia" became lodged in my head as a name I liked.

When I found out I was pregnant, I wrote "Olivia due" on my calendar on the due date. Of course, I did not know that I was having an Olivia with special bonus baby Dominic. It just seemed impossible to name her anything else. She was Olivia in my head from the moment I knew I was having a baby. If I'd had two boys, one would have been Olivia. Or I guess Oliver.

On one hand, it's a tribute to J and her spirit. I think sometimes Olivia has channeled the fiesty spirit of both her namesake character and "Big sister" J who made me fall in love with the character. On the other hand, O is her own person and has been from the minute she was born, floppy and struggling to breathe but fighting off any attempts to help her. I like to tell people that she took on a team of doctors and nurses and won. Her little feet still have purple bruises from the IVs 6 months later. There's a toughness and a sweetness about her that's so fun to watch as she grows, even as I curse that stubbornness every time I put her down for a nap, cut her little toenails, or try to wipe her nose. At 2 months, we noticed that she wasn't just absently staring at the T.V. but that she liked watching hockey. At 5 months, I realized that she wasn't accidentally ramming her brother at full speed in the walker -- she was doing it deliberately and loving it. Even her ultrasounds showed her chewing her brother's foot, pulling her own ear, and shaking her head in protest in a way that I recognize over and over again now.

So yes, everyone may have an Olivia. But no one else has my Olivia.
And thank god she's been asleep long enough to let me write this.
Posted by Lesley at 4:18 PM 1 comment: