So, yeah, I'm Mommy-blogging in an attempt to get myself writing again.  And yes, I'm product reviewing cloth diapers.  But although I've won a few things from GroVia-- my favorite cloth diaper company -- in a facebook contest, this review isn't solicited or sponsored by them.  I think they have a blog affiliate program -- I'll look it up if I finish this entry. Right now, that's totally unlikely considering O is sitting on my lap, practicing what I can only assume to be some sort of Kung-Fu with a red pen, which I am letting her do in an attempt to keep her keys off the keyboard.

First of all, as strange as it seems, I just took it as a no-brainer that I'd cloth diaper.  I have no idea why.  Maybe because I remember my little sister in cloth diapers in the early 80s, maybe because I use "mamma cloth" -- non-disposable feminine care items because disposable products are so hard on my skin.Really, I'm not that crunchy.  I love my fast food and technology too much to claim to be more-environmentally-responsible-than-thou.  But because my skin reacts so badly to disposable products, I really wondered about how my babies would do with disposable diapers.  Apparently I left the hospital with a diaper rash as an infant and never wore disposable diapers since.  D also left the hospital with a bad diaper rash.  It looks like he's inherited my skin, poor baby. 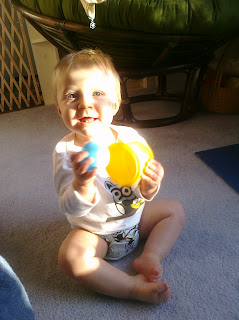 So, it's been a long, strange, poopy journey to where we are, 17 months later, happily in cloth most of the time.  We do go through 1 jumbo package of Huggies or Luvs a month. (Pampers give O a terrible rash).  Up until this last month, we sent the babies to day care in disposables and used them when we traveled.  We've finally gotten a big enough stash of cloth (and tight enough on money) that we've started sending the babies to daycare in GroVias and it's much less traumatic than I thought it would be.

I won't go into all the types of cloth diapers there are -- a good site like Diaper Junction will tell you that. But I will give a brief primer on the diapers I ended up trying:  Bum Genius 4.0s are a pocket diaper -- they are built like a disposable, but with a pocket in the back for stuffing liners into to absorb wetness.  GroVia hybrid diapers are a diaper shell with snaps.  Cotton inserts that snap into place are sold separately and you can also use prefolds or flats -- traditional cloth diapers.  GroVia also sells biosoakers -- disposable inserts for their shells.

While pregnant and on modified bedrest, I had little else to do but research baby gear.  I decided that I needed one-size diapers -- diapers that could adjust as the babies grow.  I didn't see the point in purchasing a bunch of expensive cloth diapers to have the babies grow out of them in a few months.

I wanted them to be as user-friendly as possible.  No pins, no horrible plastic pants that I remember from my sister's baby years.  Velcro.  Some offered snaps, but with my rheumatoid, I didn't think I'd be able to handle snaps as well.

I purchased a stash of 4 Bum Genius 4.0s, a newborn sampler package, and 1 Gro-Via shell with 2 soakers and a  pack of biosoakers.  Honestly, I didn't expect to like the Gro-Vias that much.  I bought them on a whim.  At first, I didn't think the snap-in-soakers made sense -- why fuss with changing an insert when you could just change a whole diaper, like you would with a disposable? 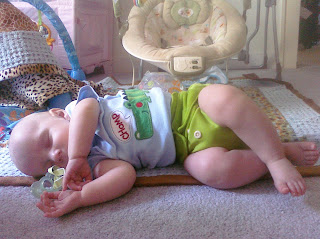 But D, the champion peer that he was, managed to leak out of every diaper that I tried -- except the Gro-Vias.    But I loved the super-waterproof shell, made out of wet-suit material.  And I realized that it was much less laundry to throw a soaker in the diaper pail than it was to throw in a whole all-in-one or pocket diaper.  I could snap in a soaker while holding a wriggling, wailing newborn with one hand -- stuffing a pocket diaper was another matter entirely. Soakers were a fraction of the cost of a pocket or all-in-one diaper.  I only had to change the shell every two days or so, or when it got dirty.  I soon learned to rotate shells, giving one time to air out and always keeping a second on hand with a soaker already snapped in.

I kept my Bum Genius 4.0s for overnight diapers and they've also served me well -- the velcro has just now worn out after months of heavy use.  But the Gro-Vias pretty much have been my workhorses.  I now have a stash of 45 soakers and something like 20 shells -- which lasts about 2 days for twins. 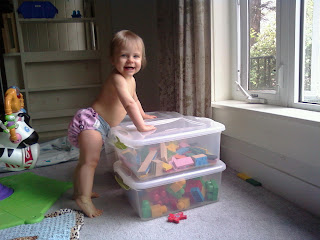 I seldom use the biosoakers because they are at least as expensive (and slightly more in most cases) as traditional disposables.  But when I can get some through a gift card or a trade online, I do.  They are great to travel with.  When I took O to Shriner's in St. Louis to have her foot looked at, I flew with her instead of driving.  A pack of 50 biosoakers took up a fraction of the space traditional disposables would have.  And biosoakers are compostable and much more environmentally-friendly.

In the summer after the babies were born, GroVia came out with a new all-in-one.  I bought one to try it.  I have a love-hate relationship with it.  I love how thin it is and how clothes fit over it.  I love how easy it is to launder.  But it's pretty stiff and the snaps are difficult for me.  O uses it at night often, but I wonder how comfortable it is for her.

My in-laws bought diaper liners for us from Babies-r-us.  I remember thinking I wouldn't use them. Um, wrong!  Using disposable, flushable liners means that most of the gross stuff can either go down the toilet or in the trash, not on the diapers.  And when something -does- get on the diaper, I take the trash can that I use as a bucket to the shower and use the hand-held sprayer to clean.  I empty the trash can into the toilet when done.  People buy diaper sprayers that attach to toilets for this reason, but my shower works well enough.  I don't dunk and swish like my mom had to! 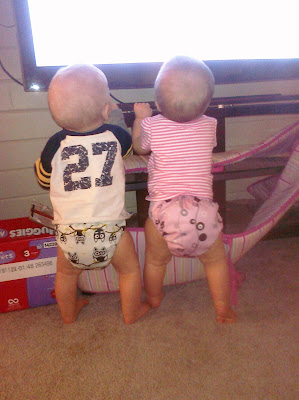 Grovia sells bioliners, but I think their texture is a little rough for my babies.  I use Bumkins liners, although I've liked the Bummies as well.

Cloth diapering can be a money pit.  It's easy to spend as much as you save looking for the perfect fit or the cutest prints.  Although I've bought many of my diapers used, I'm still guilty.  But daily, as I throw the diapers into the washer, I count them and mentally add up what I didn't spend on disposables that day.  Now that the babies are older, we save about $3.00 - $4.00 a day.  I know if you add up the water we use, as well as the detergent, plus the gallons of water wasted as I tried to come up with a laundry routine, cloth diapering may not be all that much cheaper. But it feels good to not waste as many disposables in landfills.  Plus, once my babies are potty-trained, the diapers will have some resale value.  I've not run into anyone who is out to buy used disposables. :)

Oh, forgot to mention how they are just as cute as can be on my babies! I will be very sad when we no longer need them.